My introduction to phantograms was a book that someone brought to the 2005 year-end meeting of the Oakland Camera Club: Phantograms from Nature: Western USA by Barry Rothstein. This amazing book had pages and pages of very detailed images that are viewed with red/cyan glasses. The subjects appear to sit on the page of the book, protruding up into the space above the page. Well, within a few days, I was experimenting with taking this type of stereophoto, and trying to display them.

This was a trial-and-error process, and I learned a lot in discussions with Jim Gasperini and with members of the Phantogram Yahoo group. If you are interested in these pictures, I would strongly recommend that you join this group. You must apply to become a member of the group, but that is merely a formality to try to cut down on spammers. There are currently two folios that are circulating, which allow feedback on your contributions, along with the enjoyment of seeing other people’s work.

This article is not in any way intended to be the last word on how to make phantograms. My perspective is that of a neophyte that has produced some adequate phantograms, and has learned much from other people. I am merely attempting to give some guidance and encouragement to people who may want to give it a try. So, on with the show!

First, some notes on taking the pictures. You can use a single digital camera to make phantograms of static subjects. When you take them, make sure that the camera is pointed from 40 to 50 degrees down, and make sure that the floor on which the subject sits fills the frame. If there is a wall or edge of a table in the view, you will have problems with that. It is also important that the top of the subject is close to the top of the frame, and that the floor can be seen over the top. I find that it’s best to have the subject’s base near the middle of the frame, but some people like it to be closer to the bottom than that. Think about whether your subject will have reflections or not (which will appear at the bottom of the frame.

When you have taken your pictures, then it is time to align them with each other. For a procedure on doing this, refer to my earlier article From “Frames Gone Wild” to “Bodacious Cha-Chas”.

Second, “flattening the floor” is what provides the foundation for a good phantogram. I have tried different methods of doing this, and I still don’t really have a foolproof method that flattens the floor successfully for all stereo pairs. I used to just try to match up the upper corners of the images by stretching one corner of each side. Unfortunately, this results in lines still converging at infinity, which distracts from the illusion of flatness. This first illustration shows a stereo pair superimposed of the tile in my entryway (with no subject). It is clear that the lines converge at a vanishing point that is different for each eye. 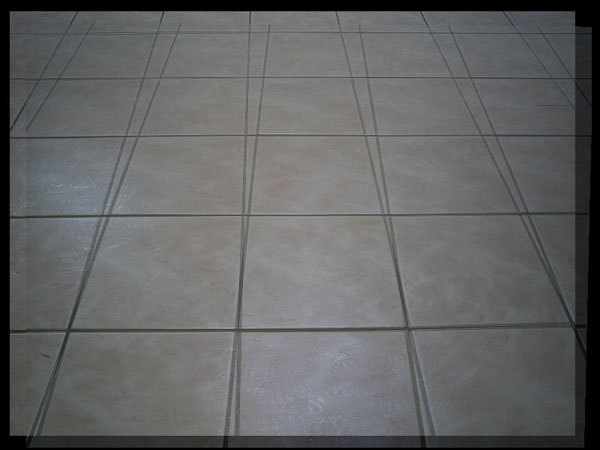 In an ideal world, we should be able to transform this image so that the space between the tiles would be parallel. I have not been able to do this successfully, but I have been able to get them close to this in the region near the center of the frame. To do this, use a “perspective” transform that takes the image and converts it to a trapezoid. After doing this to each image, the result is this: 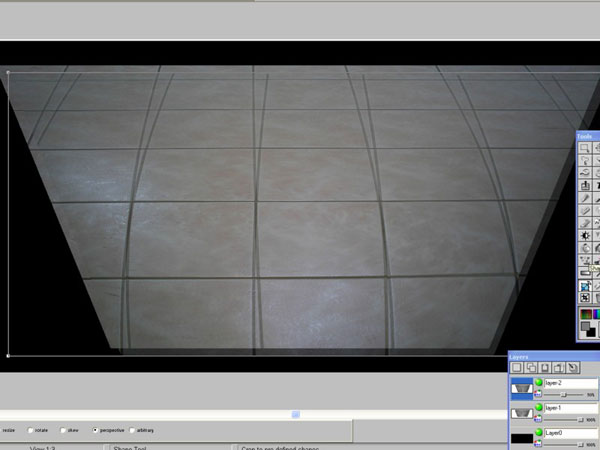 As you can see, it is close toward the middle of the frame, but the further out you go, the more curved it is. I think that this has to do with the fact that from the cameras’ point of view, the flat floor is curved like a hyperbola. Still, with a little more tweaking using an arbritary transformation (pulling on the corners), the lines near the middle can become more parallel. 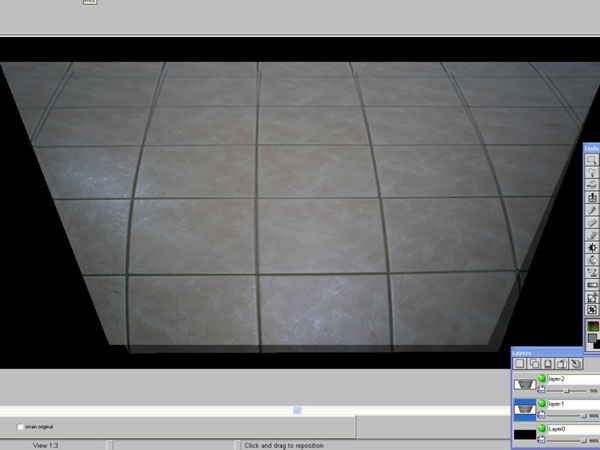 One more transformation is necessary. As you can see, the squares toward the bottom really look like rectangles. If we just squeeze the two frames together (in this case about 70%), we can make the tiles in the foreground look square. 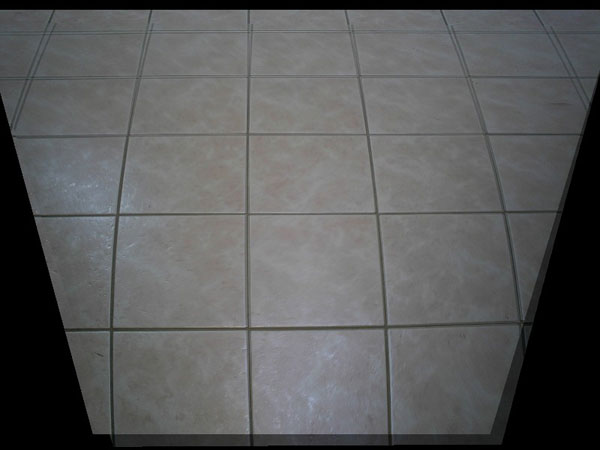 Still, the squares at the top look like rectangles. I’ll talk more about this on the phantogram assembled below. Locally, the lines in the middle are close to parallel, and, with the subject that I’m going to place there, the frame should only cover two square wide and four squares high.

So, on to the real phantogram! Here is the start point, with the two raw images superimposed: 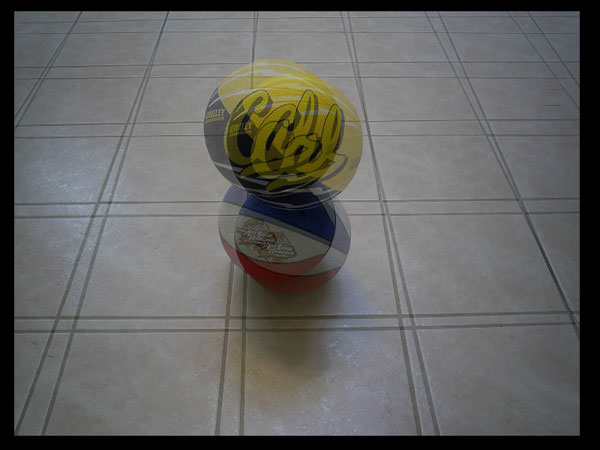 Keep in mind that these iages are not aligned yet. After alignment (as described in the article referenced above), here is the result: 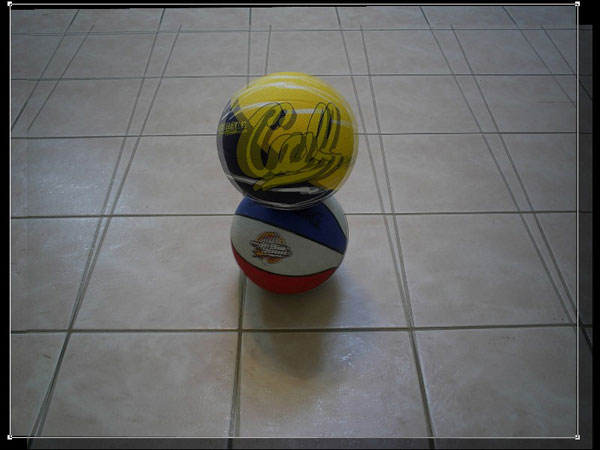 So, now we need to do the perspective tranformation as shown above: 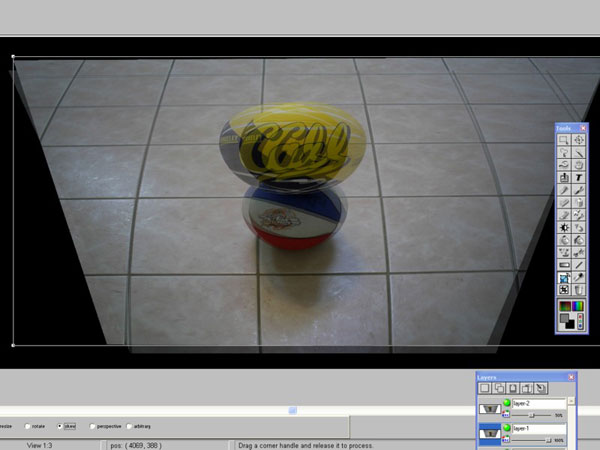 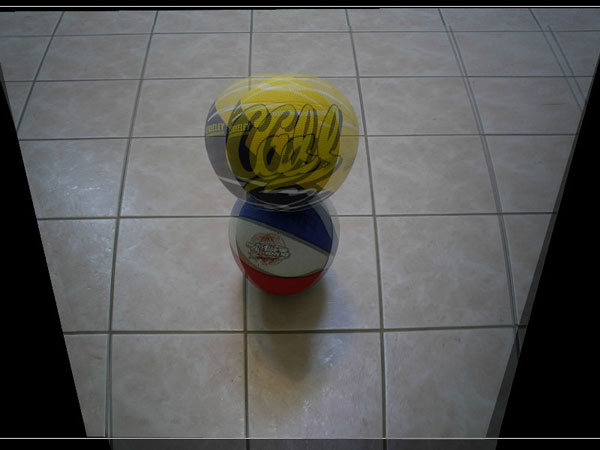 Again, notice that the tiles look square toward the front, and the ball looks round again. So now its time to select the framing for the phantogram. I don’t want to lose the shadow and reflection in front of the subject, so I selected the part in front, and the top is in the middle of the squares just above the top ball. 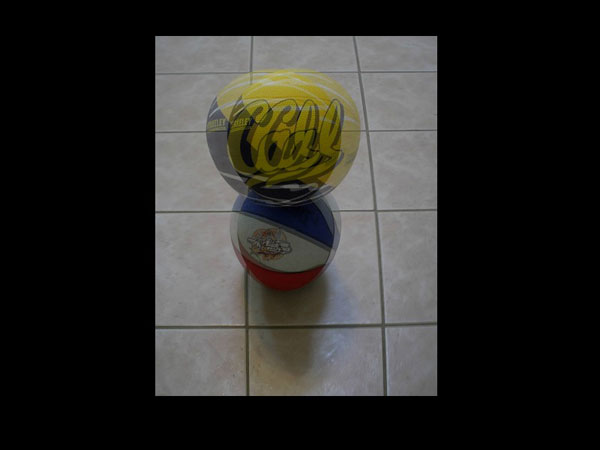 Now, it’s time to separate the pair, crop it to form a parallel stereo pair, and save the file. 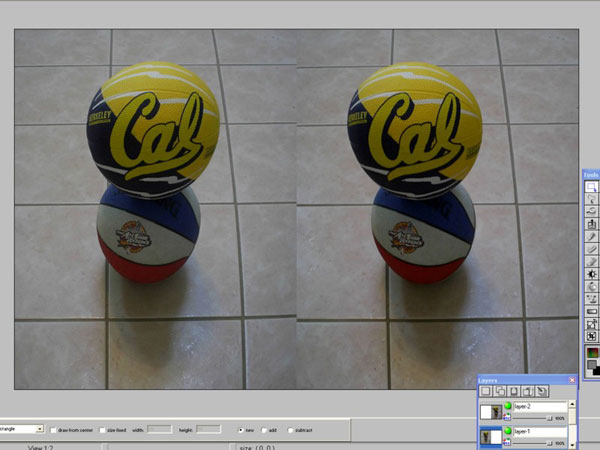 I used to make my anaglpyhs with the standalone version of the “Stereoscope Applet”. This program did not always produce good anaglyphs, especially when strong contrast was present. I have since found a better solution: Stereo Photo Maker. This is a freeware program that allows the user to select among several anaglyph algorithms, and even to do adjustments to reduce the “ghosting” that often plagues anaglyph type stereo prints. Here is a screen shot of the result of loading the above stereo image and producing a “half color” phantogram. 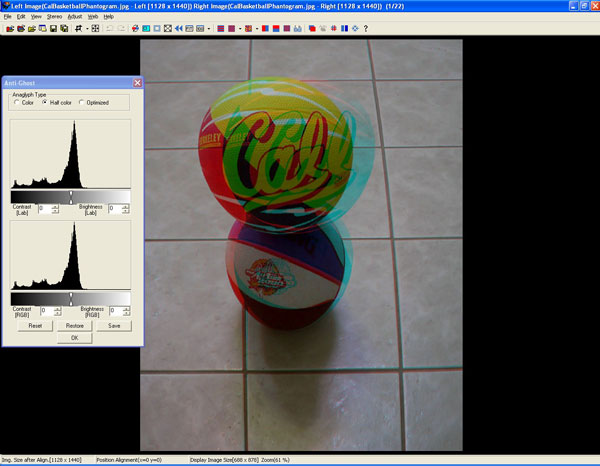 I hope that this brief article can help you get started on making your own phantograms. You will find that many people will enjoy looking at them, especially looking at the way they move when you move your head sideways while looking at them. Very peculiar motions! 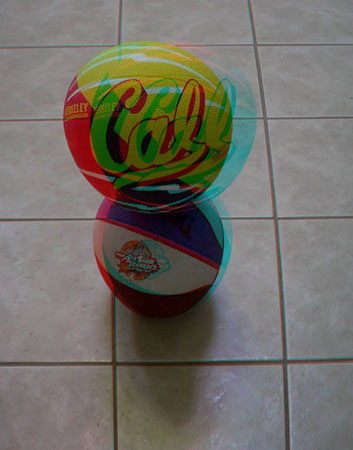